The Giants are committed to making AT&T Park the "greenest" ballpark in the country by making environmental stewardship a top priority.

Achievements: The MLB Sustainable Operations Committee of MLB Stadium Operations Directors presented the Green Glove Award to the Giants for the ninth consecutive year in recognition of their industry leading recycling efforts. They are the only MLB club to have received this award since its inception. The Giants had the highest recycling rate in Major League Baseball meaning they diverted the most waste from landfills. The Giants diverted 95% of trash from landfill during the 2016 season. In 2012, the Giants were awarded the WRAP Award, The Waste Reduction Awards Program, administered by the California Department of Resources Recycling and Recovery (Cal Recycle) for outstanding waste reduction efforts. Also in 2012 the Giants won The Governor's Environmental and Economic Leadership Award (GEELA), California's highest environmental honor. The program recognizes individuals, organizations, and businesses that have demonstrated exceptional leadership and made notable, voluntary contributions in conserving California's precious resources, protecting and enhancing our environment, building public-private partnerships and strengthening the State's economy. All awards are on the Virgin America Club Level behind home plate in a sustainable display case.

LEED EBO&M Certification: The Giants, in partnership with PG&E and ABM, became the FIRST major league ballpark to receive U.S. Green Building Council certification for Leadership in Energy and Environmental Design (LEED) for Existing Buildings, Operations and Maintenance (EBO&M). The 2010 LEED Silver Certification recognized the Giants and its partners' efforts to achieve sustainability and efficiencies in the areas of human and environmental health, including sustainable sites; water efficiency; energy and atmosphere; materials and resources; indoor environmental quality; and innovation in operations. In 2015 the Giants were awarded LEED Gold Certification in recognition for their further increase in sustainability efforts. The LEED Gold Certification in EBO&M awarded to the Giants was the first ever awarded to an MLB Stadium. Green Garlic Fries Anyone? Sustainable Concession Stand:  The Giants, in partnership with PG&E, ABM, Centerplate, Henny Penny and Coca-Cola, turned one of its most popular concession stands; the Gilroy Garlic Fries stand (Promenade Level, Section 119) into the ballpark's FIRST sustainable stand. This 550-square foot sustainable stand was completely retrofitted with Henny Penny Open Fryers, which reduce gas consumption by 32 percent, cut utility cost by more than half and automatically reduce cooking oil consumption by 12 percent. Coca-Cola's Energy Management System Cooler saves up to 35 percent more energy than traditional models. The standard lights were replaced with High Lumen lights and ballast lamp starters, which are the most efficient tube (T8) lights and starters available and use 36.5 percent less electricity. The signage in the stand, provided by EcoSignWorks.com, is made on 100 percent biodegradable and recyclable materials. The drink cups are recyclable and the paper boats and carry trays are compostable. The paint used to repaint the stand "green" is environmentally friendly. In all, the stands energy efficient appliances save enough energy to fry an additional 110 tons of garlic fries. Approximately, 800 pounds of garlic fries are prepared in this stand per game.

Green Team: The Green Team was established in 2009. The Green Team is comprised of all employees who are easily identified by their unique uniforms made from recycled materials. The Green Team proactively works with ballpark guests to assist with their recycling and composting of trash.

Recycling: The Giants continue to lead the industry with their greening efforts and programs. For the ninth consecutive year, the Giants won the coveted MLB Green Glove Award, given to the team leader in recycling and general sustainability and initiatives. The Giants continue to set industry records with their waste diversion numbers year after year, with 95.08 percent of their waste in 2016 being diverted from going to the landfill through an aggressive recycling and composting program (57 percent in 2009, 75 percent in 2010, 85.2 percent in 2011, 94.7 percent in 2012, 94.1 percent in 2013 and 95.7 percent in 2014, 94.8 percent in 2015). Recyclables and compostables include cans, bottles, plastic cups, cardboard, paper, wood pallets, electronic components, light bulbs, batteries, cooking grease, food waste and grass clippings. The Giants are the single largest contributor to the San Francisco Compost Program. 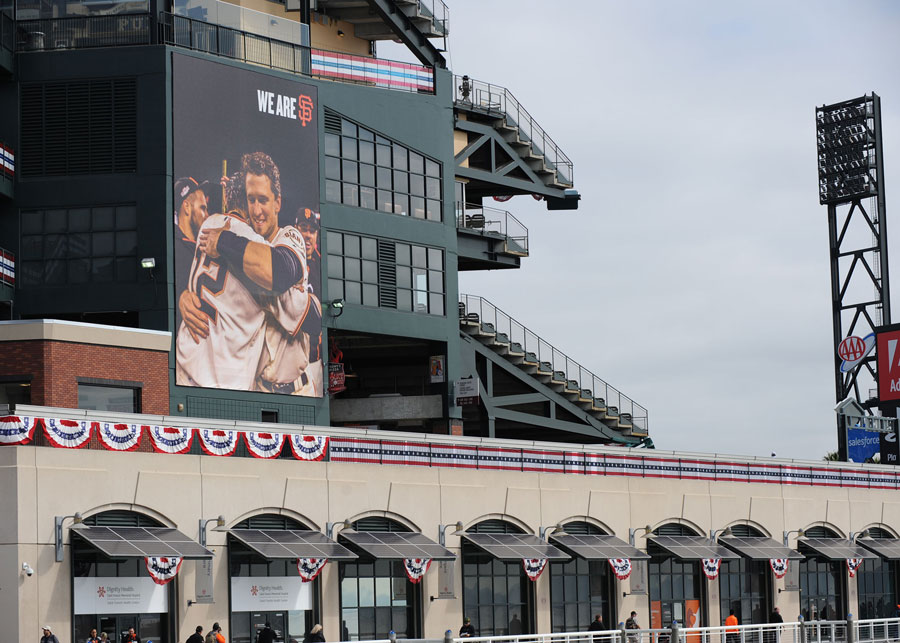 Solar Power: The Giants, in partnership with PG&E, became the first MLB ballpark to install a solar system that generates green energy for PG&E customers in the City and County of San Francisco. PG&E installed 590 Sharp solar panels in three areas of AT&T Park - on the Port walk along McCovey Cove, on a canopy over the Willie Mays pedestrian ramp and on the roof of the Giants Building. Since its installation in 2007, the solar system has provided enough energy to power over 5,200 homes, and avoids the emission of over 360,000 pounds of greenhouse gases.

Energy Efficiency: Since AT&T Park opened in 2000, improvements in energy efficiency have been a daily priority of the ballpark operations team, especially in the area of lighting retrofits. The fan experience has continually been enhanced throughout the years with the addition of party suites, food offerings, and game presentation (i.e., HD Scoreboard), and the additions have actually resulted in decreased energy usage. The field lighting was completely retrofitted this off season replacing all current lighting fixtures with LED lights. By upgrading the 556 main fixtures with LED lights this reduces the current per fixture wattage by more than 50 percent - from the burning of 2250 kilowatts per fixture to 960 kilowatts. The energy savings for the new lights is estimated to be 3,586 kilowatt hours per game or 290,466 kilowatt hours for the regular season. Retrofit projects have included replacing several hundred incandescent lights with compact fluorescent lamps, installing motion sensor lighting, replacing concourse signage lighting with an infrared-type high output lamp controlled by a low output ballast, installing Dyson hand dryers in designated bathrooms and stripe curtains in all walk-in refrigerators. The Mitsubishi Electric Diamond Vision HD scoreboard, installed in 2007, is 78 percent more efficient than its predecessor.

Electronic cigarettes and vaporizers are included in this prohibition.

Water Conservation: The Giants have implemented a number of water conservation measures in their efforts to maintain one of the best playing fields in baseball. Conservation measures include: The installation of an irrigation clock, which receives weather conditions, including evaporation-transpiration information, from five different weather stations. It uses this information, coupled with the measured site data, to establish zone watering times. This has resulted in a 33 to 50 percent drop in irrigation water usage. The usage of an amended infield mix from a 66% sand, 20% silt and 14% clay to a 50% sand, 25% silt and 25% clay infield mix. The increase of clay reduces the watering of the field by 33 percent. The usage of an efficient irrigation head results in increased nozzle distribution of water and a pervasion wetting agent that allows the water to infiltrate the soil quicker. The usage of a field wide sub-aeration system that can assist in water retention in the root system of the grass from the maintenance of positive air pressure in the drainage system.

The Garden: The San Francisco Giants and their award-winning food service partner, Bon Appétit Management Company, opened The Garden at AT&T Park in 2014. The Garden supplies fresh-picked greens, vegetables and fruit for Bon Appétit's ballpark menus and serve as a culinary and nutritional classroom for children in the community. It will also serve as another unique gathering place for fans to enjoy AT&T Park before and during games.