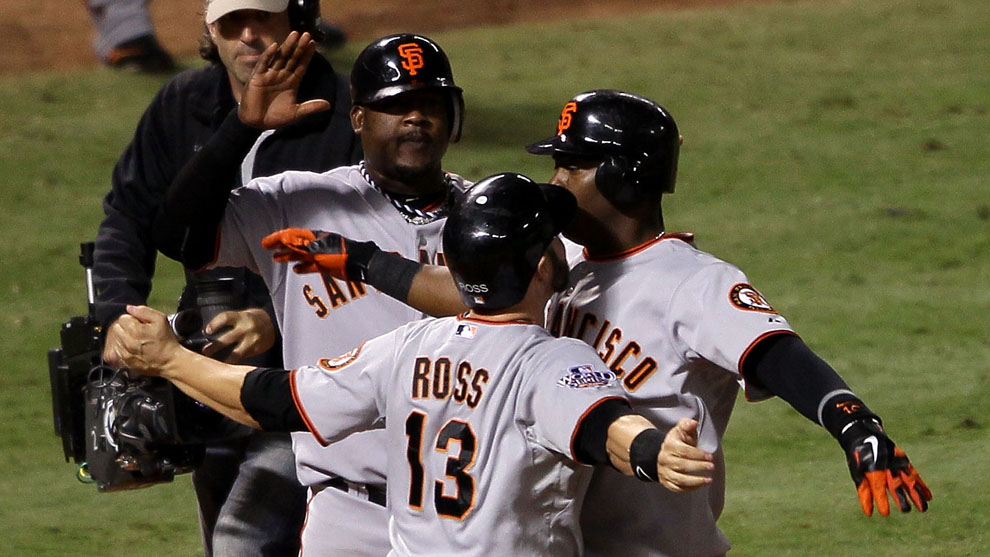 The 2010 World Series featured two clubs searching for an elusive title, as the San Francisco Giants hadn't won a World Series since moving from New York in 1958, while the Texas Rangers had never won a Fall Classic.

The Giants advanced by defeating the Phillies in six games in the National League Championship Series while the Rangers beat the Yankees in six games in the American League Championship Series. It gave the Giants their fourth World Series appearance since moving to San Francisco, and it was the Rangers' first time in the World Series dating back to their inauguration as the second Washington Senators team in '61.

Game 1 was expected to be a low-scoring pitchers' duel featuring a pair of former Cy Young Award winners in Giants ace Tim Lincecum and Rangers ace Cliff Lee. But it didn't play out that way, as the Rangers scored twice early on Lincecum, and Lee struggled, giving up seven runs over 4 2/3 innings. The Giants ended up winning 11-7 behind three RBIs from both Freddy Sanchez and Juan Uribe.

That set the tone for the rest of the series, as the Giants won another lopsided affair in Game 2 with a 9-0 victory. Giants right-hander Matt Cain tossed 7 2/3 scoreless innings while the offense erupted for seven runs in the eighth inning to put the game out of reach. Edgar Renteria hit a solo homer and had three RBIs on the day to pace the offense.

With the series headed back to Texas for Game 3, the Rangers capitalized on a strong pitching performance from Colby Lewis for a 4-2 win. Lewis went 7 2/3 innings, giving up two runs, to outpitch Giants lefty Jonathan Sanchez, who lasted just 4 2/3 innings and gave up four runs. Mitch Moreland and Josh Hamilton homered for the Rangers.

But the Giants reasserted their pitching dominance with another shutout in Game 4 with a 4-0 victory behind 21-year-old left-hander Madison Bumgarner. Bumgarner threw eight scoreless innings and allowed just three hits. Aubrey Huff hit a two-run homer off Rangers right-hander Tommy Hunter in the third inning before Buster Posey added a solo shot in the eighth.

Game 5 was another matchup between Lincecum and Lee, and this one lived up to its billing with Lincecum emerging on top to lead the Giants to a 3-1 win and their first World Series title since 1954. Lincecum allowed just one run on three hits with 10 strikeouts over eight innings and was backed by a three-run homer from Edgar Renteria off Lee in the seventh inning. Renteria's heroics sealed his World Series MVP Award, as he hit .412 with two homers and six RBIs in the Fall Classic.