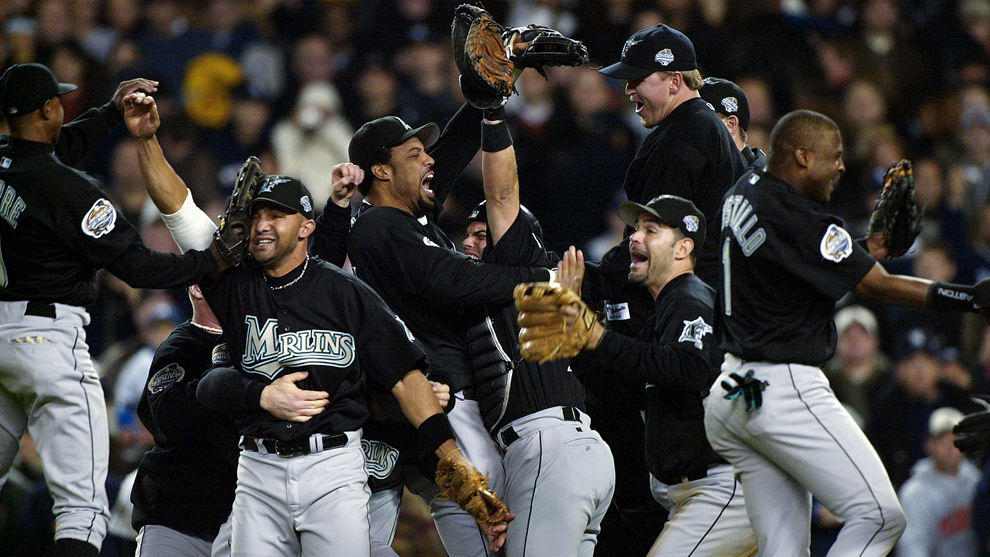 The Marlins advanced to their second Fall Classic in seven years thanks in part to an overzealous Cubs fan and a botched grounder in Game 6 of the NLCS before beating young flamethrower Kerry Wood in Game 7.

The Yankees -- playing in their fifth World Series in six years -- advanced to the Fall Classic thanks to the heroics of Aaron Boone in Game 7 of the ALCS against the rival Red Sox. Boone lifted an 11th-inning, walk-off home run off Boston's Tim Wakefield to place Boone forever in Yankees lore -- and Red Sox scorn.

Florida showed no feelings of awe in Yankee Stadium during Game 1 against lefty David Wells, scoring in the first on Ivan Rodriguez's sacrifice fly. Yankees shortstop Derek Jeter tied the game in the third with an RBI single, but Marlins center fielder Juan Pierre answered in the fifth with a two-run single to give the Marlins enough cushion to withstand a Bernie Williams solo homer as they took a 3-2 win.

It was the Yankees who stormed out in Game 2, as Hideki Matsui launched a three-run homer in the first and Alfonso Soriano added a two-run bomb in the fourth. New York's Andy Pettitte allowed one unearned run in 8 2/3 innings, scattering six hits and striking out seven.

The Yankees took the first game in Miami, as Mike Mussina outdueled Josh Beckett in an epic pitching matchup. "Moose" fanned nine over seven innings of one-run ball, while Beckett allowed two runs on three hits and struck out 10 in 7 1/3 innings, as the Yankees won, 6-1.

The Marlins rallied to take the next two games, winning Game 4 thanks to Alex Gonzalez's 12th-inning walk-off homer against Jeff Weaver. That momentum carried over into Game 5, as the Marlins scored three in the second and staved off a ninth-inning Yankees rally in a 6-4 victory. Florida's Brad Penny allowed two runs (one earned) in seven innings, while Ugueth Urbina earned the final two outs to notch the save.

Game 6 is better known as the "Josh Beckett Game." On short rest, the 23-year-old righty completely shut down the vaunted Yankees lineup in New York, tossing a five-hit shutout and striking out nine to clinch the title for the Marlins in a 2-0 victory. Pettitte threw seven strong innings, but allowed two runs -- one on an RBI single by Luis Castillo and another on a Juan Encarnacion sacrifice fly.

Beckett earned World Series MVP honors for holding the Yankees to two runs on eight hits and striking out 19 in 16 1/3 innings over his two starts.