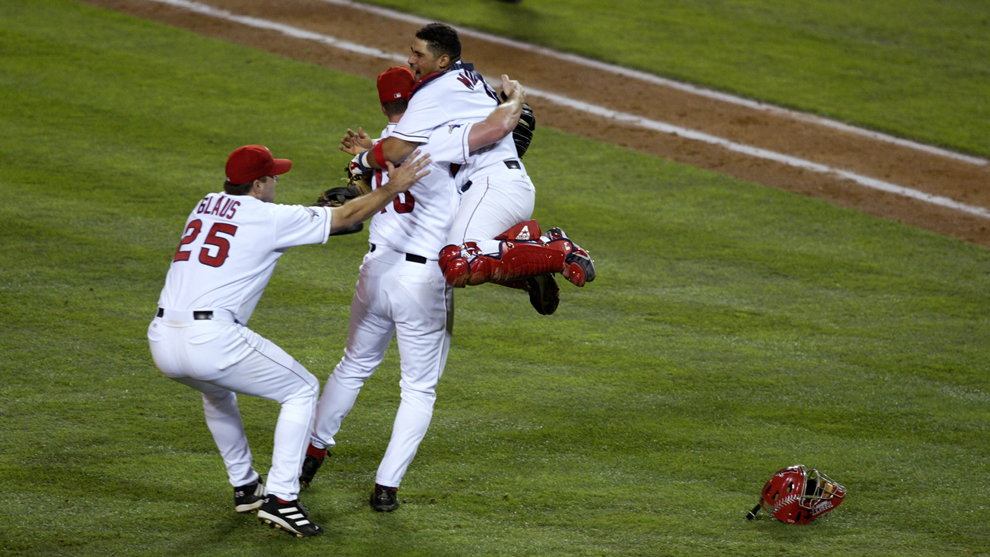 Barry Bonds was the big name of the 2002 World Series. He hit four of the San Francisco Giants' record 14 home runs. He set a record with a .700 on-base percentage, reaching in 21 of 30 plate appearances (including 13 walks, seven intentional). The Giants scored 44 runs, third-most in Series history.

And yet, it was the small-ball Anaheim Angels who won the all-California matchup in the franchise's first World Series since its founding in 1961. Not that the Angels couldn't flex their muscles, too. They had seven home runs, including three by Series MVP Troy Glaus.

This would be a Series lacking in dominating starting pitchers. Only one, the Angels' Jarrod Washburn (18-6), was among the Major Leagues' top 21 pitchers in victories during the regular season. No surprise then that the two teams combined for Series records in runs (85), homers (21) and extra-base hits (45).

Bonds homered in the first World Series at-bat of his career and the Giants took the opener, 4-3. Game 2 at Anaheim was a slugfest, won by the Angels, 11-10, as Tim Salmon went 4-for-4 with two homers and four RBIs.

Moving to San Francisco's Pac Bell Park, Bonds hit his third homer in three games but it didn't matter as the Angels routed Hernandez and won, 10-4. The Giants rebounded to win, 4-3, on David Bell's tie-breaking single off rookie sensation Francisco Rodriguez in the eighth. In Game 5, the Giants took command, three games to two, by thumping the Angels, 16-4, with Bonds, Jeff Kent and Kenny Lofton each contributing three hits.

But the teams were headed back to Anaheim where, improbably, men and monkey would work in perfect harmony to win it all.

The Fall Classic went the full seven games after the Giants, with a 5-0 lead in the seventh inning, managed to blow Game 6 at Anaheim. The notorious Rally Monkey was gyrating on the scoreboard screen, prompting the crowd of 44,506 at Edison Field to go bananas. The Angels' hitters took the cue.

They'd managed just two hits, an infield single and a broken-bat bloop, and Giants ace Russ Ortiz got the first out of the seventh. Then Glaus and Brad Fullmer each singled and Giants manager Dusty Baker decided he better sew things up with his bullpen. Ortiz left his shutout in the hands of Felix Rodriguez. The count went full on Scott Spiezio and the next thing that right fielder Reggie Sanders saw was a three-run homer sailing out of his reach. It was 5-3 and the momentum had shifted faster than the Rally Monkey could dance.

The rest of the game went like some Hollywood script writer came down into the dugout with new pages for Angels manager Mike Scioscia. Reliever Brendan Donnelly put up a zero in the Giants' eighth and here came the Angels again.

Darin Erstad homered to right field off Tim Worrell and it was 5-4. Frenzy around the Big A. Salmon singled and so did Garret Anderson, with Bonds' bobble in left field allowing pinch-runner Chone Figgins and Anderson both to reach scoring position. Now Baker called on closer Robb Nen but Glaus hammered a two-run double over Bonds' head. The Angels were up, 6-5, and that's the way it ended as closer Troy Percival pitched a perfect ninth.

The iced-down bottles of champagne in the Giants' clubhouse were quickly packed away.

The seventh game at Anaheim matched Angels rookie John Lackey against the Giants' battle-tested Livan Hernandez. But, in the third inning, the Angels loaded the bases with no outs and Anderson cleared them with a double. Hernandez was finished and so were the Giants. The 4-1 lead held up as Lackey and relievers Donnelly, Rodriguez and Percival combined for a six-hitter, and the Rally Monkey and the Angels clicked their heels.