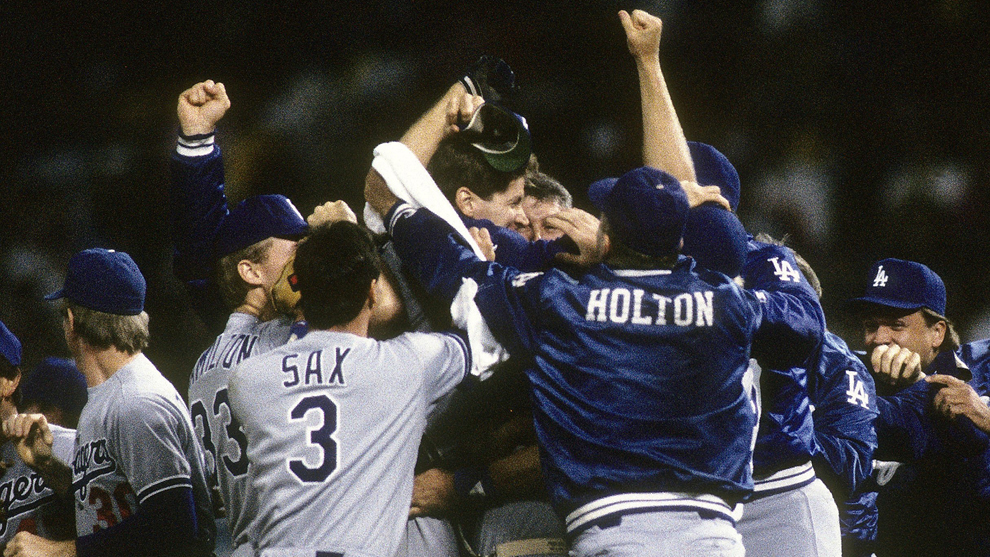 Path to the World Series
ALCS: Oakland over Boston (4 games to 0)NLCS: Los Angeles over New York (4 games to 3)

The Series opened at Dodger Stadium, and the home team got off to a fine start when Mickey Hatcher hit a two-run homer off A's ace Dave Stewart in the very first inning. Oakland struck back in the second, though, as Jose Canseco blasted a grand slam to center off Tim Belcher, who was removed after the inning. The Dodger bullpen was brilliant, and when Los Angeles came up in the ninth inning they trailed by just one run, 4-3. But if they were to come back, they'd have to do it against baseball's top closer, Dennis Eckersley. Eckersley retired the first two Dodger batters in good order, but then he walked pinch-hitter Mike Davis. With the pitcher due up next, L.A. manager Tom Lasorda called on ... Kirk Gibson, who could barely walk, let alone run. Yet with a full count, Gibson hit an Eckersley slider over the right-field wall, winning the game and leaving his indelible mark on Series history.

In Game 2, the Dodgers strafed A's starter Storm Davis for five runs in the third inning, but it probably wouldn't have made any difference who pitched for Oakland, as Hershiser wasn't far from perfect. In nine innings, he allowed just two walks and three singles ... and went 3-for-3 at the plate with a pair of doubles! Mike Marshall paced the Dodger hitting attack with a triple and a two-run homer, and the Dodgers cruised, 6-0.

Back in Oakland for Game 3, the A's finally got on the board, and in dramatic fashion. With one out in the bottom of the ninth, Mark McGwire blasted Jay Howell's 2-2 pitch over the fence in left center, giving Oakland a 2-1 victory.

The Dodgers jumped to a 2-0 lead with a pair of runs in the first inning of Game 4, but the A's pecked away, cutting the deficit to 4-3 with a run in the bottom of the seventh. That's how it ended, though, as neither club scored in the last two innings.

Hershiser wasn't perfect in Game 5, but he was plenty good enough, limiting the A's to four hits and two runs. Meanwhile, the Dodgers went ahead 4-1 on two-run homers from Mickey Hatcher (first inning) and Mike Davis (fourth), both off Storm Davis, loser for the second time in the Series. The final was 5-2, and the Dodgers were unlikely champs.