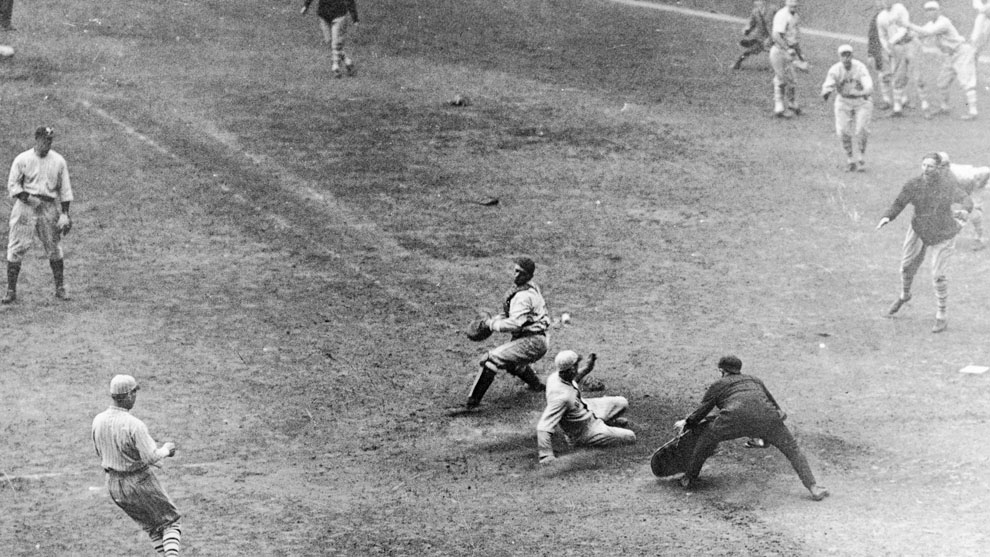 For the third straight year, the Yankees and Giants matched up, but this time the Yankees would play their home games in brand-new Yankee Stadium, just across the Harlem River from the Polo Grounds.

In the opener, the Yanks grabbed a 3-0 lead in the second inning, but the Giants went ahead with four runs in the third, Heinie Groh's two-run triple being the key hit. It was 4-4 in the ninth until Casey Stengel smacked a Joe Bush change-up to deep center field, and sprinted around the bases for an inside-the-park homer. Rosy Ryan retired the Yankees in order in the bottom of the inning to save the 5-4 victory.

The Yanks evened the Series the next day, as Herb Pennock went the distance for a 4-2 triumph and Babe Ruth walloped a pair of solo home runs. Game 3, however, went to the Yankees' old nemesis Art Nehf, who spun a six-hit shutout to top Sam Jones, 1-0. The game-winning blow was again supplied by Casey Stengel, who homered into the right-field bleachers in the top of the seventh.

The Yankees went on top early in Game 4, scoring six runs in the second on their way to an easy, Series-tying 8-4 victory. They followed that up with more early success, scoring three in the first and four more in the second inning of Game 5, and this time the result was an 8-1 blowout. Joe Bush went the distance, allowing only three hits.

For most of Game 6, it looked like the Giants would push the Yankees to a seventh game, as Nehf was rolling along with a 4-1 lead after seven innings. But in the top of the eighth, the Yankees scored five times thanks to three walks and Bob Meusel's two-run single, and the Yanks held on for a 6-4 triumph and their first-ever World Series.